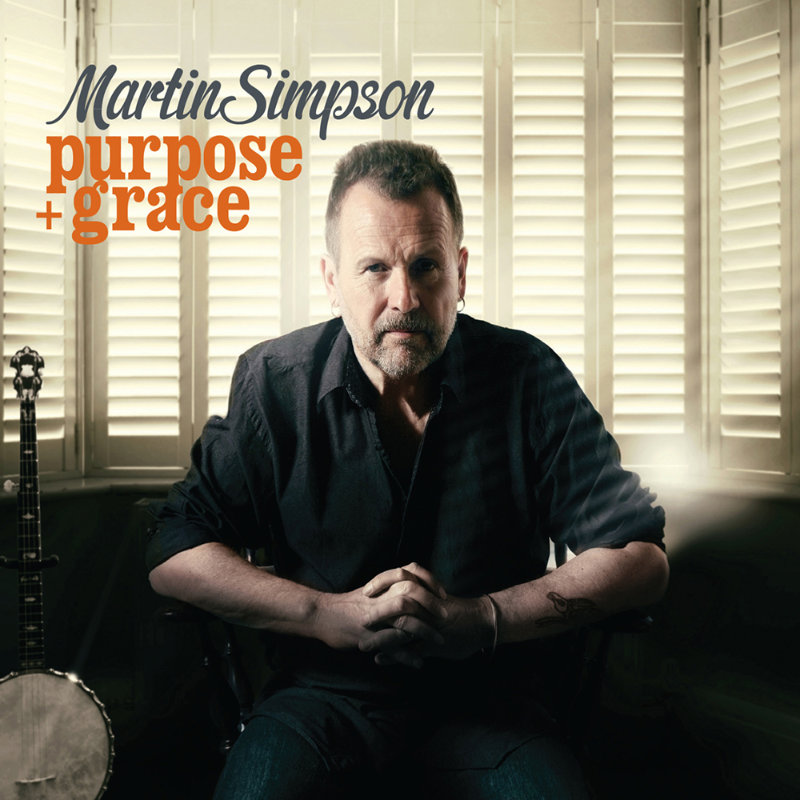 “Simpson can seemingly do no wrong at the moment, his Indian summer turning into an extended heatwave on yet another brave and sometimes daring album… (Purpose & Grace) is an album of infinite range and moods and yet again must rank up there among his very best.”
Colin Irwin, fRoots

“I am a big fan of Martin’s playing. Perhaps the highest praise I could give is to say that he never stops getting better!” Richard Thompson

Purpose & Grace takes its very apposite title from the great American songwriter Yip Harburg (composer of Somewhere Over The Rainbow, Brother Can You Spare A Dime, and Only A Paper Moon)
“I am one of the last of a small tribe of troubadours who still believe that life is a beautiful and exciting journey with a purpose and grace well worth singing about.”

This album marks a bold and confident step for Simpson. Building upon the strengths of Prodigal Son and True Stories, like a movie producer, he conceived the whole project over a number of months and then invited some of his favourite musicians to bring their stellar talents to the recording sessions. Jon Boden, B J Cole, Dick Gaughan, Fay Hield, Will Pound, June Tabor and Richard Thompson join Martin’s regular band – Andy Cutting, Andy Seward and Keith Angel – on an exemplary series of performances. The material shifts from Anglo-American ballads, Scots and English traditional songs to new compositions from Bruce Springsteen, Richard Thompson, the aforementioned Yip Harburg and Martin Simpson.

Central to the whole project is a new Simpson composition based upon the words of Banjo Bill Cornett of Hindman, Kentucky, from a 1958 home recording. Cornett makes a heartfelt exposition of the beauty and purpose of traditional music-making:

“This is Banjo Bill Cornett, I’m at home today, thirteenth day of February 1958. Here by myself, nobody but me around and that’s when I usually play the banjo and sing and whatever. My children grew up, and they fell for this rock’n’roll music – honky tonk music whatever you might call it. I don’t like that and I catch them all gone, my wife gone and then I carry on to suit my own self and I’m a making this record to give somebody – I don’t know who I’ll give this recording to, I want to give it to someone who will keep it and if there’s any people after I’m gone who’d like to hear my carrying on as far as my singing and banjo playing is concerned, I’d like them to keep it.”